Música en los Barrios founded in 1993, is a musical project granting access to musical education to children and adolescents, who live in poor and disadvantaged circumstances. Young teachers give fundamental music and recorder classes in the poorest districts of Managua, the capital of Nicaragua. Música en los Barrios works in 9 different barrios of Managua and the program involves nearly 400 children.

The project Música en los Barrios uses music as mean of bringing together children and adolescents from different social backgrounds and standards of living. Introducing music helps creates a positive and creative learning environment which in the end entails learning an instrument.

Beyond the musical education “Música” offers workshops for teachers, willing to broaden their skills. Teachers of preschools and elementary schools attend “Talleres”, and learn a simple music curiculum. Songs, rhythm, raps and dances in the classroom integrate the element of music into an otherwise traditional and formal class structure.

Since 2006 “MelB” has been part of the cultural center Casa de los Tres Mundos in Granada. The German-Austrian non-governmental organisation Pan y Arte provides financial support for this program.

The goal of „Música en los barrios” is to spark underprivileged children’s interest in music and to give them an opportunity to play. Through recorder classes, MelB provides an access to music which would be unatainable to these children because of their socioeconomic situation. Without this program, the only way to receive musical instruction is to attend private schools or expensive conservatories. We bring music directly to the barrios.

The secondary goal of MelB is to integrate musical education into the elemantary and preschool curiculum. To increase the adoption of musical education, MelB promotes a more open educational style, integrating pedagogical content with the ex-cathedra teaching style common in Nicaragua. For this reason there are also Talleres(classes) for teachers.

The program offers a reasonable mix of leisure activity and education for the kids in their free time. Children of the barrios often live in less than stable conditions with unregular school attendance and diffficult family relations.

Finally, the growth and development of the children’s interpersonal skills shall be enhanced. It is well documented that music has positive impacts on auditory perception, the eagerness to learn, social behaviour in groups, and generally on emotional, cognitive and physical development.

Gaining more confidence, learning thoughtfulness, and strengthening verbal skills are the most important attributes in the children’s development in MelB’s recorder classes.

“Places, where programs like that are arising, the rate of crime and violence, the abuse of alcohol and drugs and the number of youth pregnancies is considerably declining”
– Dorothy Barnhouse, founder

1983: The spanish Padre Ángel Torrellas and Hermana Margarita Navarro found the “Centro Cultural” in the barrio Batahola Norte in Managua with a choir for juveniles and adults.

1991: In the barrio René Cisneros Dorothy Barnhouse, a North American, starts to teach singing and piano to a group of children.

1993: Dorothy Barnhouse gets to know Padre Angel and the “Centro Cultural de Batahola”. Together they start to train flute-teachers and establish lin this way the project “Música en los Barrios” (MelB).
In the same year the German, Luise Scherf, integrates music workshops for elementary school-teachers in the program.

1995: The most advanced pupils form the first MelB recorder-ensemble.

1998: The Swiss Urs Leonhardt Steiner, conductor of the orchestra Sinfonietta of San Francisco and composer, trains the MelB-teachers in conduction of orchestras and music theory. He had comeevery year until 2005 to continue the teacher´s education.

2000: The German organization “Pan y Arte” is now the main sponsor of MelB.
The teachers found their own ensemble, the “Orquesta de flautas dulces” (recorder’s orchestra).

2003: For the first time a European volunteer works for one year at MelB.

2005: MelB becomes a national project . With the support of the Swiss organization “Cooperación suiza para el Desarollo“ (COSUDE) MelB can give classes in the departments of Matagalpa, Estelí, Jinotega and Rivas. For the first time the three MelB ensembles play in the “IV Temporada de Música clásica” (4rth week of classical music) in the Teatro Nacional “Rubén Darío” in Managua.
In September , MelB gets his own office in the extension of the Biblioteca Alemana – Nicaragüense in Linda Vista, Managua.

2006: Since January MelB has been part of the Fundación Casa de los Tres Mundos
The three ensembles are unified into the orchestra „orquesta júvenil de flautas dulces“.

2008: The German volunteer Jens Sommer starts to give piano clases to talented students. Since then, those clases have been continued by every successional volunteer.

2009: The „coro preuniversitario (choir preuniversitary) of the national university of Costa Rica invites the orquestra of Musica en los Barrios. An ensemble of six young recorder players travel to Heredia to Costa Rica for one week to give concerts and didácticas. 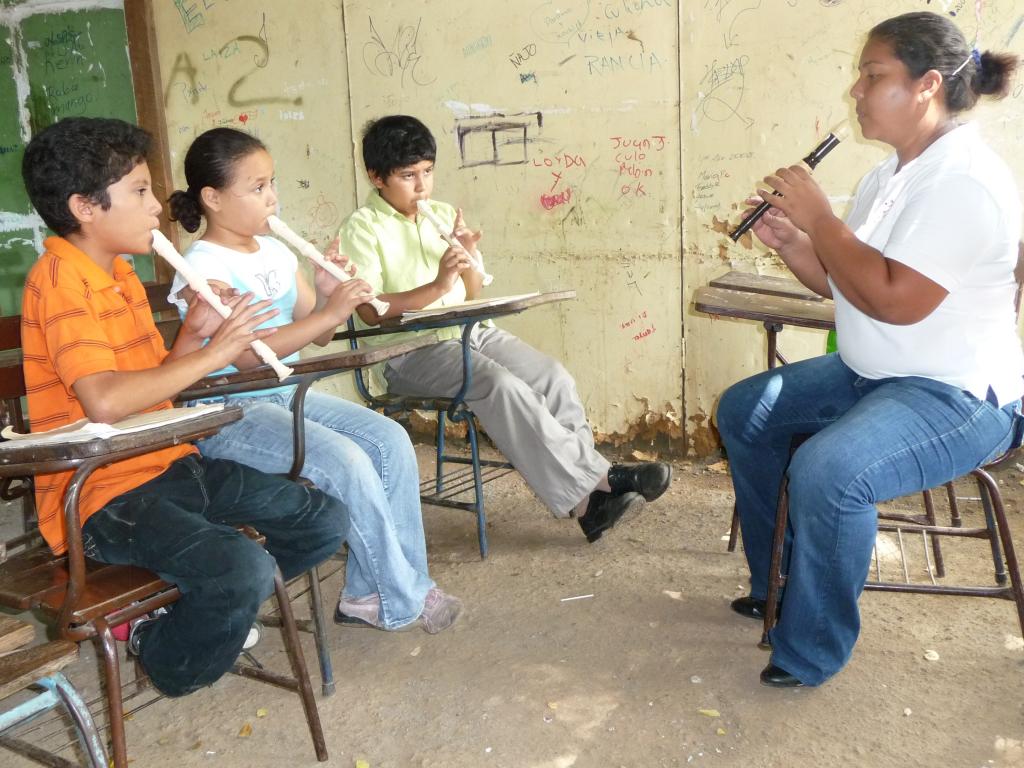